Daniel did not suddenly become bold when he was taken into captivity in Daniel chapter 1. Although there is no record of Daniel's early childhood in , we know that he was nurtured with the Word of God during Josiah's revival.  The Word of God is very important to lay a strong foundation for our spiritual growth.

The Book of Daniel also tells us how Daniel built up a strong relationship with God steadily.  How?  Through daily prayers of drawing close to God. 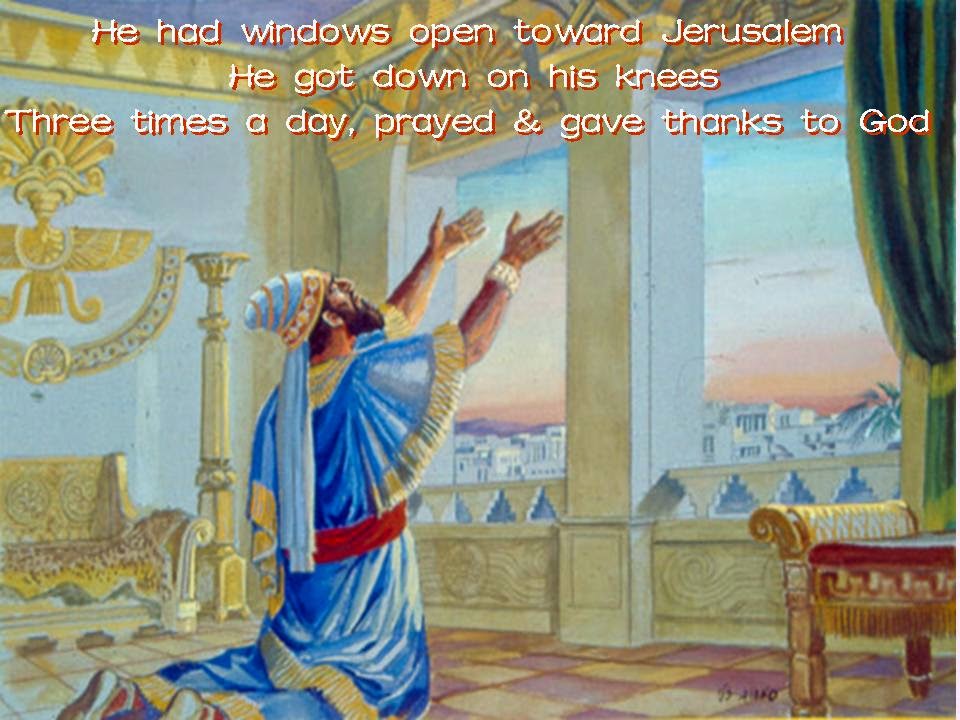 He went to his house where he had windows in his upper chamber open toward . He got down on his knees three times a day and prayed and gave thanks before his God, as he had done previously.

As you can see, Daniel had a regular habit of praying before his God 3 times a day on his knees. This pattern of spiritual life did not come about haphazardly.  It requires long years of spiritual discipline to daily set aside specific times to draw close to God in prayers.  This is the key to being men of God.

But I call to God,
and the Lord will save me.
Evening and morning and at noon....

Why did Daniel choose these times to pray?  Notice the verse says that Daniel set his face toward .  Daniel remembered his early years in where daily sacrifices were conducted at the , morning and evening, with the evening sacrifices extending to the night.  (Numbers 28:1-8)

Early days: Daniel’s spiritual life is already well nurtured in his early years in .  In he could have very well have been a follower of Jeremiah.  We see him mentioning about Jeremiah.  (Daniel 9:2)

Often times when we think of Daniel, we easily bypass Daniel's early years of spiritual training in . He heard Jeremiah's preaching. He was only a child.  Never underestimate the potential of children listening to sermon messages.

Daniel also learned to pray already as he grew up as a young boy in his teens.  He might have had godly parents to nurture him spiritually from day 1.

We can surely use Daniel's example to instill spiritual patterns in our children. Blessed are today's children who grow up in spiritual families with godly parents who can teach them the God's abiding Word.

We need to work hard in Sunday School to instruct our children to love God with all their hearts in their early age.  We teach them the Word of God and turn all our story telling, song singing and arts and crafts to inspire them to truly love God with their all.