What Smites the Image?  The Stone 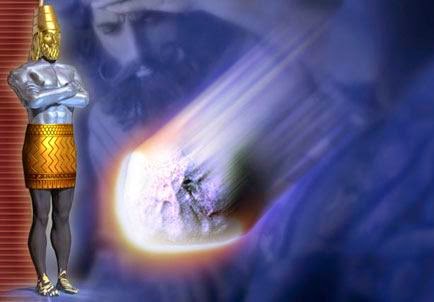 The Image & The Stone

But the Stone that struck the statue became a huge mountain and filled the whole earth.

The Interpretation of The Image & The Stone

·        In the time of those kings, the God of heaven will set up a kingdom that will never be destroyed, nor will it be left to another people.

·        It will crush all those kingdoms and bring them to an end, but it will itself endure forever.

·        This is the meaning of the vision of the rock cut out of a mountain, but not by human hands—a rock that broke the iron, the bronze, the clay, the silver and the gold to pieces.

In our previous article, we have seen the four successive worldly empires ruling the earth.  These dominant world powers have come and gone just as God said they would.

We are living in extraordinary times to this great climax for the final act of the Rock, cut not by human hands, destroying all the worldly empires.

Tomorrow, we will look at more spiritual principles so that we can see how all these apply to our lives.